With the holidays upon us, I thought you might enjoy some outstanding new modern blues and rock songs for your Thanksgiving. If you’re in other countries and don’t celebrate this US holiday, we hope you enjoy these songs during the rest of your week.

Here are 12 new blues and rock songs to fuel your holiday celebration or any celebration for that matter, whether you’re spending it at home or somewhere else. Included is information on each artist, video and the artist/band’s website should you want to dive in further.

At Rock & Blues Muse we are grateful for all of you, our supporters. It means the world to us that you like what we do, because we do it out of passion for great blues, rock and roots music, and a dedication to supporting artists and live music.

If you are in the giving mood, please consider supporting us with a contribution to keep our online magazine up and running. No matter how small, your gift helps pay our writers and operating expenses. See Here To Give To Rock & Blues Muse.

We wish you all a joyous and peaceful Thanksgiving.

Buddy Guy
Multi Grammy Award-winning blues icon Buddy Guy celebrates his seventh number one album, The Blues Don’t Lie with guests Mavis Staples, Bobby Rush, Elvis Costello, Jason Isbell and more. This album, produced by Grammy winner Tom Hambridge, is the follow up to his Grammy winning album The Blues Is Alive and Well (2018). His 34th album, The Blues Don’t Lie marks the 65th anniversary of Buddy Guy’s arrival to Chicago from Louisiana, before he became one of Chicago’s blues greats. The album tells the story of his life journey.
Info and Video See Here

The Commoners
Canadian roots rockers The Commoners are known for their high energy riffs, soulful vocals and rich harmonies and songs that stand for something. Offering their own blend of rock & roll, southern blues and roots music with a modern vibe their new album Find A Better Way was released November 4th. With a heck of a vocalist Chris Medhurst at the helm, this four-piece creates songs that are unlike their counterparts in similar genres. Not just outstanding musicians and songwriters, The Commoners are a southern rock and roll band with soul.
Info and Video See Here

Troy Redfern
British slide guitar master, vocalist, and songwriter Troy Redfern gets as close to perfection as the old masters ever did on his brand new album The Wings of Salvation. After releasing an unprecedented six albums in just under two years, Troy’s new album is his most compelling work to date. It highlights Redfern’s powerfully edgy vocal delivery, condensed song writing skills, tight arrangements, complimented by his trademark “firebrand” slide guitar playing.
Info and Video See Here

Larkin Poe
Nashville-based Larkin Poe, the Grammy nominated roots rock sister duo, spring forth from their past two highly acclaimed albums, Venom & Faith and Self Made Man, with the new release Blood Harmony, a tribute to their Southern heritage, Southern rock and roll and spare blues. Blood Harmony affirms Larkin Poe as a powerful force in contemporary roots rock. Their strength as independent women, highly talented vocalists, songwriters and musicians, fuel what is surely their best album to date.
Info and Video See Here

Kenny Wayne Shepherd
The five-time Grammy nominated guitarist, platinum artist Kenny Wayne Shepherd, is about to release Trouble Is…25 on December 2nd, a reinterpretation of his seminal album Trouble Is.. including a brand new song.  A riveting live performer, Shepherd is one of the most talented and distinctive guitarists of our time. Over the last 25 years, Shepherd has released seven acclaimed solo albums and two with his all-star side project The Rides, alongside Stephen Stills and Barry Goldberg.
Info and Video See Here

Shemekia Copeland
Multi Award-winning blues and Americana vocalist Shemekia Copeland recently released her new album Done Come Too Far on Alligator Records. Copeland has one of the most soulful, powerful voices of our time. The four-time Grammy nominee (2022 Grammy nomination for Done Come Too Far), features slide guitar master Sonny Landreth. Copeland is at her most courageous and passionate best.
Info and Video See Here

Kai Strauss
Multi Award-winner, blues guitar star Kai Strauss has a new album coming out on November 25th, Night Shift featuring Toronzo Canon and Sax Gordon. A veritable guitar feast, this highly talented guitarist, singer-songwriter is at his absolute best on the album with powerful, original blues. A stunning player. Influenced by Albert Collins, you won’t be sorry if you dive into this one.
Info and Video See Here

Theory of a Deadman
Multi-platinum rock band Theory Of A Deadman has returned with their hard-hitting new single “Dinosaur” (Roadrunner Records). With sky-high hooks, big riffs, rumbling grooves, and a razor-sharp sense of humor, Theory Of A Deadman is Tyler Connolly [lead vocals, guitar], Dave Brenner [guitar, backing vocals], Dean Back [bass], and Joey Dandeneau [drums, backing vocals]. They have persisted as an unapologetic, unbreakable, and undeniable hard rock force with major multi-platinum hits and countless sold out shows in each of the past two decades.
Info and Video See Here 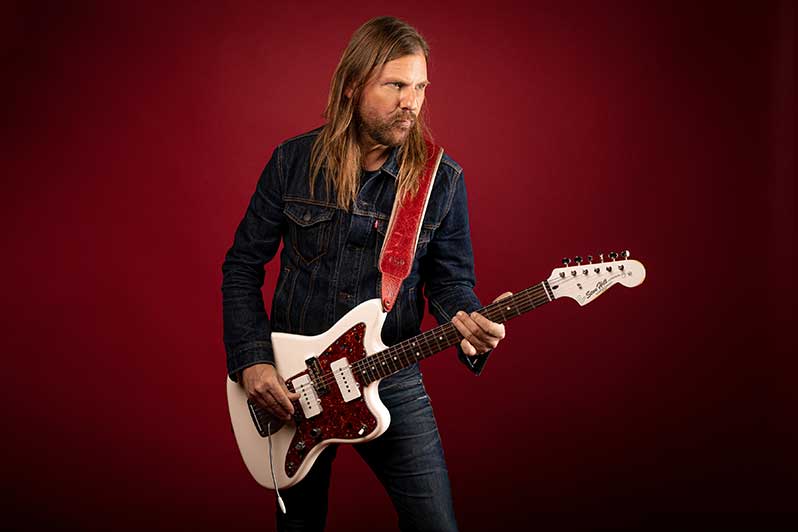