A rebel with a cause: how I breathed new life into Monteverdi’s Saracen warrior | Classical music

I first bumped into Claudio Monteverdi’s Il Combattimento di Tancredi e Clorinda through the good offices of my composer friend Glyn Perrin almost 20 years ago. He sent me the music and my Indian music-trained ears found the description of the eponymous battle excitingly familiar. With no libretto to hand I had no idea what was being sung. The cut and thrust of the words and the almost palpable physical energy it produced reminded me of the jathi used in Indian classical dance, vocal syllables patterned to create rhythmic energy.

So for me dance and Monteverdi were linked from the very start – though probably not in the way that the composer might have intended. He had the communication of emotion in mind whereas a jathi is abstract, though not dry.

Indian classical music and dance take pleasure in hiding the time signature from the knowledgable listener and in challenging them to follow the music’s rhythmic adventures. Anything that is too obviously revealing or predictable, such as a steady count of threes or fours, is avoided. Il Combattimento, too, has this unpredictability, though for very different reasons. The music is tossed and pulled in different directions in order to produce the sound effects the story needs. We hear horses galloping, swords clashing and the sharp inhalation of breath of a man in shock.

The title of the work, an operatic scena, makes it plain that it is about a battle between two characters – Tancredi the Crusader and Clorinda the female Saracen warrior. So I was surprised to find that these two major figures have only minor roles as singers. It’s the narrator (testo) and the instruments who describe the drama; the hero and heroine themselves are mostly silent. As a choreographer, I wondered where they were for the rest of the time. In fact, it was more than wondering – it became an obsession.

The only way to find out was to recreate them in the next production for my company.

Many others who have staged this short work have asked themselves the same question. Productions of Il Combattimento sometimes require the two singers to move or have introduced additional performers or dancers to play the roles. Invariably, the movement has tended to follow the instructions to the musicians, becoming an extension of the orchestra, clashing their swords where the music says they should and, in my opinion, missing the difference that a genuine dance score could bring.

But I knew that such a score would, of course, have to be an addition to Monteverdi rather than an extension. With this (perhaps foolhardy) ambition of an additional dance score in mind, the first musical decision that I made was to have the narrator sing not only his part but also those of the two fighters. The physical roles of the combatants were taken by two dancers who, together with the narrator, bring the story alive.

A dance score, to be effective, cannot literally enact the images that are in the libretto. Sometimes dance imagery needs more time, or less, so it was a matter of judging how these two vastly different scores sit together in the same slice of time.

I could not have done without the creative generosity of Robert Hollingworth, our musical director and conductor, and Ed Lyon, the tenor who sings the testo’s role.

The other aspect of Il Combattimento that set me on yet another fascinating journey was the story itself. I was surprised to discover that this early baroque gem was about a very contemporary issue – the complex relationship between Christian west and Islamic Middle East. It is set in the first Crusades. The knight challenges his enemy to a duel outside the walls of Jerusalem without knowing that the warrior is a woman – it is night and her face is covered. To add to the drama it is the same woman that the knight had seen in passing on the first day of battle and had fallen in love with.

The Saracen is duly slain, and, in her dying moments, converts to Christianity. So far so conventional, a story that presumably ticked all the boxes required by the church authorities of the time. But what is unconventional and far more intriguing is the fact that the woman refuses to give her name even when the Crusader spells out the advantages of the fame she will accrue in future retellings of their epic battle. She is defiant to the end and in her final moments is elevated by Monteverdi (and the 16th-century poet Torquato Tasso, from whose book the libretto is taken) to an almost Christ-like figure. The conquering Crusader is left a tearful wreck as he realises that the person he has killed is the woman that he loved.

If neither Tasso nor Monteverdi (or indeedthe narrator and the Crusader) could get Clorinda to say her name, I wondered if she needed a different composer to persuade her.

I was very fortunate to find the Syrian-American composer Kareem Roustom was interested in taking on this task. I had heard a work of his called Dabke which is a social dance popular across many Middle Eastern countries. I had loved the way he had transported something very culturally specific and given it a new and different authenticity.

First, I had to transport Clorinda to our times. And so a contemporary and communal avatar of the Saracen warrior was created to be interpreted by four dancers. She is still a fighter but now in the streets of a war-torn city. She remains a woman who loses much but is never lost. Roustom’s music includes Syrian soprano Dima Orsho, who sings a poignant Arabic song about war and suffering that was written at the time of the first Crusades. The urgency of the strings in partnership with her voice produces a constant unsettledness that gives Clorinda a musical home. Kareem uses the dabke rhythms of Iraq to create a rich harmonic language of shifting moods. Cross-rhythms give a sense of struggle, captured in the pitching of the cello against the strings. The narrator and the Crusader make their appearance too, establishing a connection back to Monteverdi’s Il Combattimento.

They ask Clorinda the same question as in Monteverdi’s work – “What is your name? Who are you?” In the intensity and complexity of Kareem’s music there is the beginning of an answer to this question. 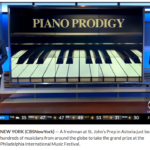 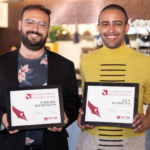