For about a dozen years or so, husband-and-wife duo Luke Doucet and Melissa McClelland from Hamilton, Canada have been taking their combined love and acumen for country music, and applying it to albums that are decidedly not predominantly country, but more of an amalgam of various influences fair to categorize as folk rock or indie rock. This approach has fared quite well for them, both in garnering fans and a strong following, and fawning praise from folks like Canada’s famed Juno Awards.

But I’m Not Crying, You’re Crying is where this Canadian duo delivers a straight up, home down, shit kicker of a country record with no wiggle room between that pronouncement and some of the twangiest records of the 1970s you might have on the shelf. With the implosion of the rock radio format causing indie rockers to flee into the ever-nebulous “Americana” genre as a safe haven, we’re well used to seeing performers encroaching into the roots world with close approximations of what they claim to be “country.” But this ain’t that.

Whitehorse proves they’re plenty capable of holding their own within the very heart of the country genre, and may have a thing or two to show some of the folks already residing there. It’s not that Whitehorse hasn’t released some pretty country-sounding songs in the past. But they approach this album with such authority, you could swear they’ve been doing this forever. Highly skilled from a technical standpoint, they were able to take their vision for this album, and actualize it in a way that’s astoundingly authentic to the genre.

Along with being doggedly classic country, I’m Not Crying, You’re Crying is also decidedly Canadian, and charmingly so. The simple acoustic song “Division 5” is about a heartbroken guy trying to declare his lover missing to the Royal Canadian Mounted Police, and being informed that’s not exactly their jurisdiction. Not only is the song very Canadian, it a very skilled piece of songwriting. The song “Manitoba Bound” is about the twangiest track on the record, and one hell of a fun listen. Luke Doucet slays all over this album, and the fact that they’ll cuss a little here and there keeps their style of classic country from feeling fuddy duddy.

But perhaps even more than being classic country and Canadian, I’m Not Crying, You’re Crying is also very purposefully a pandemic album. This all started with them wanting to record a classic country covers album during Canada’s notoriously restrictive lockdowns, but they stumbled into writing originals in a classic country style, which seemed fitting for the time since there’s just something comforting about country music in chaotic times, and because the lonesomeness the period wrought on the population is so perfectly communicated through classic country compared to other genres.

With some of the songs like “6 Feet Away,” it’s pretty obvious where the inspiration comes from, but others like “The Road,” “I Miss The City,” and “Lock It Down” aren’t necessarily pandemic dependent, and are more just pandemic adjacent. Somewhat unfortunately, Whitehorse is broaching these subjects at a time when some listeners could feel like they’re a few months behind the relevancy arc, while the polarizing aspect of pandemic responses may make some roll their eyes without giving the songwriting a fair shake.

Others may just be ready to move on from the era as opposed to be reminded of it, but Whitehorse isn’t here to make any sweeping proclamations about public policy. They’re more interested in communicating the human aspect of the pandemic. Years from now when this era in music is studied, this album will make the perfect specimen of how COVID-19 influenced culture.

The songwriting and the songs of this album all hold up to hard scrutiny, including some that are just good ol’ classic country tearjerkers such as “If The Loneliness Don’t Kill Me,” and the duet “Leave Me As You Found Me.” Even though this is a duo, Whitehorse is smart to record most songs with either Luke or Melissa singing the stronger lead as opposed rendering everything duet style. This keeps the approach to each song fresh. Combined with the compositional prowess they bring to the writing and production, there is a lot of variety on this album, and the 2nd half picks up from the first few more somber songs.

As a band, Whitehorse may not be 100% native to country music, but you wouldn’t know it from listening to I’m Not Crying, You’re Crying. It’s one of the most classic country, crooning, crying steel records you might hear all year. But it also brings this duo’s unique perspective, and our collective experience through the pandemic to classic country in a way that makes it feel fresh, inspired, and alive in both ears and hearts. 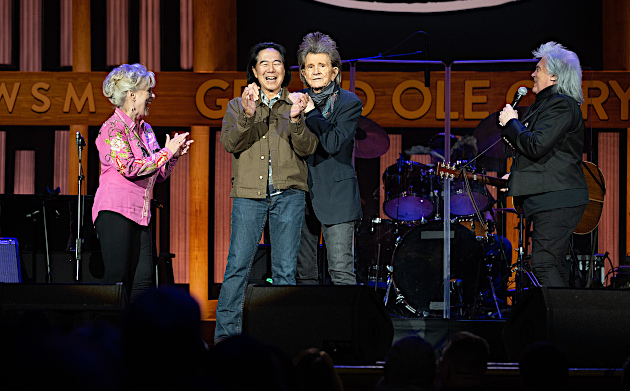