Fellow New Yorkers Ben Vida and Lea Bertucci team up for Murmurations, a sound-bending excursion into an experimental dimension. The scissoring of the voice, free improvisation, musique concrete, and sound poety all converge to produce a strange kind of paradise. Even in the face of its deep whirlpools of experimentation, the music remains strangely smooth, slippery, and slightly surreal. Murmurations is their first release as a duo, the result of a fruitful summer in 2021, when the pair were living on opposing sides of the same mountain. Described as ‘non-hierarchical improvisation’, Vida and Bertucci are known and much admired for pushing the boundaries of sound, not just in the New York experimental scene but globally, and Murmurations is a prime example of their colourful sound.

Playful and intoxicating, exotic and always full of surprises, Murmurations includes manipulations of tape, modular synths, samples, and vocal improvisations, reshaping and reforming patterns of speech and language. What could be thought of as a deconstruction of the human voice and its associated languages could also be thought of as a new voicing and a new creation. Its devolution also allows for an evolution, even if many would consider the dissolving a backwards step or label it as a lower, almost subterranean style of speech. Not only does it make for interesting music and new digressions, but it opens up the airways and voices what sometimes cannot be voiced through traditional, classic forms of speech and language. On top of that is the record’s tonal intimacy, reaching deep into the fabric of the instrument and widening its range, capabilities, and possibilities. The voice swoons as much as it struggles, reinventing itself in a fun, light-hearted way.

The deconstruction allows the sound to be present in its purest, primal form, naked almost, and the core of its sound thrums and pulses in dazzling wavelengths of prismatic colour, somehow appearing clearer and more cohesive even as the familiarity of human language breaks down.

The individual presence of each musician is actually non-existent, as one cannot tell whose fingerprints are on what part of the music, and this sweet blurring adds to the surreal nature of the music, which is exuberant, playful, and always has more to say. It’s desperate to say something, and even in its ambient-drenched zones, there’s a feeling of excited energy and urgency. It’s a free-flowing conversation, running long into the night, and on the basis of this, they still have plenty more to say. 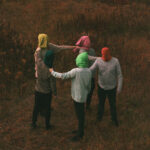