Charley Crockett Holds Court at a Sold Out Ryman

For at least the next six weeks, Charley Crockett remains the reigning Saving Country Music Artist of the Year. And what a year it has been for Charley Crockett, who has recently transitioned off the club circuit to full-blown theaters. And in country music, there is no bigger theater than the Mother Church of Country Music, the Ryman Auditorium. Playing the Ryman is a rite of passage. Selling it out is even more significant. Selling it out on a Monday is an even greater feat, and that’s what Charley Crockett did on Monday, November 14th.

“I always wanted to play on this stage,” Crockett said to the crowd. “but I never thought it was possible.” Then he laid the blame squarely on the patrons who filled the Ryman to capacity for making it all happen for him.

The Ryman Auditorium is an ideal place to see any artist, regardless of genre. But with the way Charley Crockett reignites appeal in the Golden Era of country music—an era that transpired right there on the Ryman stage originally—the legendary venue makes for the ideal location for catching a Charley Crockett show.

For Crockett, they ran out the footlights that Johnny Cash once famously kicked out, and got him banned from the Grand Ole Opry for a spell. The backdrop to the stage was golden velvet, as was the skirting around the band’s risers. Stepping foot in the Ryman on Monday night was like taking a trip back to the 1950s.

Charley Crockett commenced the set with a near verbatim rendition of the first half of his new album, The Man from Waco. Then he played a couple of cover songs from George Jones and Johnny Paycheck before launching into the title track of his previous original record from 2021, “Music City USA.” It’s not exactly a country protest song, but it’s one with a pointed message to the Nashville machine about the reception many outsiders and authentic souls receive when they arrive in town.

Something about that song, at that time, and in that venue made for such an unbelievably singular moment, after Charley rang out the final note, the crowd came to their feet, broke out in uproarious applause, and didn’t stop for what seemed like an eternity. It was as if all of the pent-up frustrations people have with the state of country music today and how the genre treats artists like Charley Crockett came out in one big spontaneous exhalation.

Rarely or ever do you experience such a randomly generated standing ovation in the middle of a set like that. The only reason people stopped clapping and cheering is because Charley Crockett wanted to stay on time and play the next song. But rest assured—and those in attendance will attest— Charley Crockett and his rendition of “Music City USA” at the Ryman Auditorium on Monday was a moment they will never forget.

Afterwards, Charley Crockett launched into the James Hand portion of the set, paying tribute to who he calls “The real deal.” Crockett started the night on the acoustic guitar, then sang for a bit with no instrument. You knew it was on when he brought out the banjo for a few songs, but Charley Crockett always seems most comfortable with a Danelectro guitar in his hand, moving around the stage with hip shakes, boot scoots, and raising the guitar neck above his head like Dwight Yoakam.

The whole time, Charley’s backing band The Blue Drifters are behind him, seamlessly sliding through genres and eras as they follow Captain Crockett on a journey through the roots of American music, mostly dwelling in country sounds and influences, but not afraid to explore blues, soul, and jazz modes, punctuated by trumpet blasts and beefy rhythms.

Charley Crockett made sure to swing by some of his biggest hits near the end of the set; songs like “Trinity River” and “I’m Just a Clown,” the latter which spent a dozen weeks at the top of the Americana radio chart. He also played Townes Van Zandt’s “Tecumseh Valley,” and “I’m a Honky Tonk Man”—a version of Loretta Lynn’s “I’m a Honky Tonk Girl” in tribute to Loretta who launched her own career from the Ryman stage.

Charley Crockett started his career busking on street corners and lurking in back alleys. “The alley is just outside, but it’s a long way from here,” Crockett said, referring to the famous alley between the Ryman and the legendary haunts of Lower Broadway like Tootsie’s and Robert’s Western World. It’s where you can most feel the ghosts of country legends lurking.

Even if Crockett never makes it past venues like The Ryman, he’s accomplished something spectacular by getting there. Some like to criticize Charley Crockett as a show, or a shtick. Well, of course it is. But it’s a show better than most, which recalls all the goodness of classic country and American roots music, and makes it feel alive in the souls of a modern audience once again.

The Greyhounds from Austin, TX opened the set. Find a full set list below. Photos by Eric Ahlgrim. 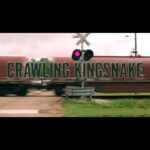 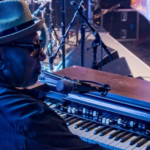