Classical Rave: Beethoven under the stars

What has more than 8,000 feet, thrives on heat and humidity, and loves Beethoven’s 9th?

More than 4,000 attendees were recorded at the SRO event June 24, though it’s hard to keep track of seated patrons when there is wine, beer, and Rita’s Ice to purchase in the open-air lobby.

Events at the Mann are festive occasions, and one does not hold performers to concert-hall standards, but Nézet-Séguin and the Philadelphia Orchestra did very well. From his opening words, clearly visible and heard via two large screens and speakers on both sides of the stage, the conductor set the tone for an evening of inspiration and perspiration. It’s as close to camping as classical music lovers generally get, but comfortable and fun in a way that classical music can and should be.

The first half of the program featured Yannick conducting the Philadelphia Youth Orchestra in Beethoven’s Egmont Overture. Nice work, youth, and a performance worthy of a mature professional ensemble. But the fact that the Philadelphia Orchestra was not to play this work seems to have been a closely guarded secret. I was as surprised as anyone to discover that talented young people would be performing, not the orchestra I expected to hear.

The Overture was followed by a lively rendition of four sections of the Philadelphia Community Mass, an imaginative work that merges contemporary musical riffs with the classical structure of the Latin mass. This was conducted with grace and fervor by Nolan Williams, Jr., featured an impassioned Philadelphia Community Mass Choir. I have a feeling we’ll be hearing more of this Mass and more from Dr. Williams in the greater Philadelphia community, and that’s a good thing.

Of course, the reason most of us attended this Monday night concert was to hear the Philadelphia Orchestra perform the Ninth Symphony of the creative genius Nézet-Séguin rightly called the greatest symphonic composer of all time. And you can also refer to him as the greatest creator of string quartets, piano sonatas, and a few other genres. 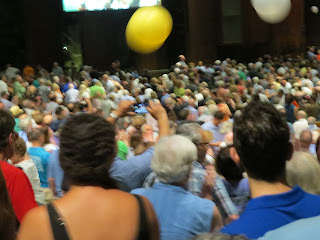 One of the charms of hearing the orchestra in an alternative venue was the change in perspective. From where I was sitting (in the green seats under the awning), the performance looked like an animated conversation between Yannick and principal timpanist, Don S. Liuzzi. Both men, wearing white, have a commanding presence and infectious energy. Their powerful gestures reinforced the centrality of percussion to this fiery musical experience, that starts with a throaty murmur in the first movement, percolates in the second (taking every repeat), and rises like a sweet permeating perfume in the third. The fourth movement, of course, is a universe in itself.

The performance of the entrance of the main tune in the fourth movement had to be the softest I’ve ever heard, making the later shouts of jubilation all the more intense. As befits a conductor seasoned in the ways of opera, Nézet-Séguin sculpted the dynamics and drama of the work to bring out maximum contrast and development.

Things that could have been better? A more pronounced articulation of the shocking discord that appears twice in the opening (it was hard to hear over the timpani). I suspect the heat and humidity also weighed heavily on the quartet who sang just before the final chorus.

All in all, however, it was a captivating night. At the conclusion, a shower of glitter and balloons fell on the jubilant audience, followed by fireworks, and I couldn’t help but hope the great Master was looking down from heaven, hearing restored, with a kiss for all the world. 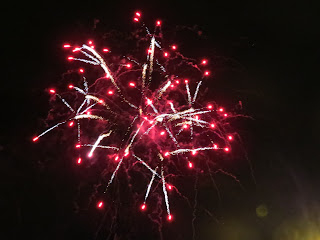 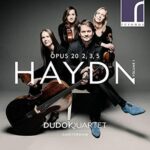 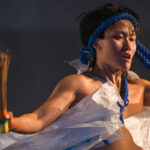 Advertisement / Publicité The Isidore, none of whose members is older than 23, has only …