This story is developing.

One of the biggest names ever in rock & roll, who also amassed a distinguished Hall of Fame career in the country music realm as well, has taken his place among the Million Dollar Quartet in the sky, right beside Johnny Cash, Elvis Presley, and Carl Perkins. “The Killer,” a.k.a. Jerry Lee Lewis, has died, only days after being inducted into the Country Music Hall of Fame, and after amassing a musical career that set the very foundations of what we consider American music today.

Born in Louisiana in 1935 and rising to fame as a Sun Studios recording artist, Jerry Lee Lewis is arguably the most well-recognized rock & roll piano player of all time, and one of the very founders and foundations of the rock and roll genre. He deserves to stand right beside Chuck Berry, Little Richard, Elvis Presley, and Buddy Holly on the Mount Rushmore of rock and roll. This is mostly what the world will remember when they remember Jerry Lee Lewis in the coming days, week, and months through songs like his signature “Great Balls of Fire,” or “Breathless” and “High School Confidential.”

Jerry Lee Lewis brought the danger to rock and roll. And perhaps a little too much danger, which cut into the success of his career. But after becoming frustrated at his inability to land a hit in rock and roll after his heyday, Lewis decided to become a country music artist in 1968. He released his first country single, “Another Place, Another Time” by Jerry Chestnut in March of 1968, and it was off to the races. Jerry Lee Lewis eventually had 17 Top 10 hit singles on the Billboard country chart, and four #1’s as a country artist.

Some of Jerry Lee’s hits included “What’s Made Milwaukee Famous (Has Made A Loser Out of Me),” “She Still Comes Around (To Love What’s Left Of Me),” “Since I Met You Baby,” “To Make Love Sweeter For You,” and “Sometimes A Memory Ain’t Enough.” Eventually Jerry Lee Lewis became one of the highest paid performers in all of country, and some of his previous rock & roll records were repackaged for the country audience.

Jerry Lee’s country music career wasn’t without controversy, of course. Beyond the scandal the piano player was already carrying around after marrying his 13-year-old 2nd cousin, he made a mockery of the Grand Ole Opry stage during his first appearance on January 20, 1973. After being warned by Opry management to respect the family atmosphere of the show, Jerry Lee took the stage and shouted, “Let me tell ya something about Jerry Lee Lewis, ladies and gentlemen: I am a rock and rollin’, country-and-western, rhythm and blues-singin’ motherfu_ker!” Lewis also played for 40 minutes instead of his appointed eight-minute slot. He was banned from the Grand Ole Opry afterwards.

But his impact and influence on country music was undeniable. This is why the CMA Committee chose to induct Jerry Lee in a crowded Veteran’s Era field to the Country Music Hall of Fame in 2022, and at a time when the American music legend was in the twilight of his life. Better to award him when he’s still around to enjoy it, and they came in just in the nick of time.

Jerry Lee Lewis was formally inducted into the Country Music Hall of Fame on October 16th, but due to health concerns, could not be at the Medallion Ceremony at the Hall of Fame in Nashville in person. Instead, Hank Williams Jr. and Kris Kristoffferson received the medallion in Jerry Lee’s honor, and then Kris Kristofferson drove to Memphis to deliver the medallion to Jerry Lee Lewis personally.

Jerry Lee Lewis experienced a stroke in 2019, which has mostly put him out of the spotlight in recent years, but he did appear at the press conference announcing his Hall of Fame induction on May 17th. TMZ falsely reported Jerry Lee’s death on October 26th, though you knew at that moment, it was just a matter of time. That time came a couple of days later, on October 28th. Jerry Lee Lewis was 87.

“He is ready to leave,” his wife Judith said, just before his death. 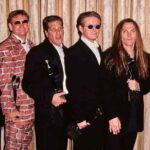 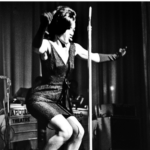