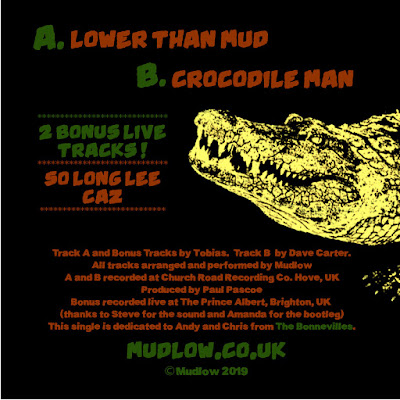 The Bosses of the Brighton branch of blues recently returned seaside from their mighty new-friend-making jaunt around the countryside with Irish pals The Bonnevilles, following the release of their, ahem, “greatest hits” set, Waiting For The Tide To Rise. I gotta wonder aloud, how the hell could they narrow their best songs down to 12 tracks, let alone the 17 tracks on the digital releases, but perhaps I digress.


Wanting to bring along some fresh music for the tour the lads released a very cool Mudlow four-song EP (I heart EPs! Give me 4-5 solid songs over 8 good ones and 4 meh, but again…I digress) consisting of a new song called Lower Than Mud from the tooth-marked, bourbon shellacked and jazz and grime-besotted carpenter’s pencil of the enigmatic Tobias Mudlow. Lower Than Mud is classic Mudlow- nimble, menacing, and subtly rocking hard in a sleek sort of country blues jazzed combo that is only bettered by Tobias’ lyrics, and story-telling.

Next up is Crocodile Man, a rare cover and a song by the late folk singer Dave Carter and Mudlow has put their stamp on it. It’s a desperate, cimmerian song that Mudlow wraps their coats around and rolls into a shaded cut down by a dark, tempestuous river.

To pound the spile into the metaphorical whiskey barrel we get two live tracks, the impossibly funky So Long Lee from their first album Welcome to Mudlow Country (2004) and Caz from 2017’s Crackling EP.

So Long Lee has long been a favorite of mine, and not just because (full disclosure/humblebrag) they let me play maracas on it once, and Caz will send a shiver down your spine. The often angular, sparking and jazzed guitar style of Tobias, his strong, raw Waitsian vocals and the characters it portrays, in combo with Paul Pascoe’s solid, thoughtful bass playing and drummer Matt Latcham’s understated batterie provide a solid yet mutable stage for Tobias’s words and guitar to dance over and with, authoring a style unlike that of any other band in the alt-whatever you want to call it scene. They do their thing and refine it, then drag it thru the dirt. Again. Definitely one of the most interesting and original bands around in any genre, and one that rewards with repeated listenings.

I’m told that this EP will have a short life. Physical copies are limited to fifty and those are close to gone. Once that happens, this set of songs will disappear. You’ve been warned.