Born and raised in Hamilton, Ont., but with family roots in Tennessee and New Orleans, Harrison Kennedy has been at the forefront of the blues since returning from self-imposed “retirement,” capturing seven BMA nominations for acoustic artist of the year. And at age 80, he’s at the absolute top of his game on this album, which features guest appearances from Ruthie Foster and Canadian powerhouse Colin Linden.

Harrison grew up singing in church choirs as a youth, traveling frequently to the U.S. before relocating to Detroit in 1970, where he became a founding member of the soul supergroup Chairmen of the Board, a skintight aggregation assembled by tunesmiths Lamont Dozier and Brian and Eddie Holland to found their own label after leaving Motown. Their debut release, “Give Me a Little More Time,” rocketed to the top of the charts and made them key players in the R&B scene as performers and songwriters, too.

Kennedy left the group to launch a solo career in 1974 before a stint in the Canadian Army’s Royal Hamilton Light Infantry then played blues, funk, gospel, soul and funk on a parttime basis while working for Allied Chemical Corporation. He finally returned to the stage fulltime after a 30-year break with the self-produced CD, Sweet Taste, in 2003, which established him as a force to be reckoned with in the acoustic blues world.

A Juno Award – Canada’s Grammy – winner for blues album of the year in 2016 for This Is from Here, Harrison co-produced this one with multi-instrumentalist Jesse O’Brien. It was recorded at Jukasa Studios in Oshweken, Ont., with Kennedy delivering both vocals and harmonica and guitar on one cut. The lineup includes Linden and Chris Caddell on six-string and Blackie and the Rodeo Kings rhythm section Gary Craig on drums and John Dymond on bass. Terry Wilkins and Paul Intson both guest on bass, and Jimmy Bowskill adds lead guitar and mandolin to two tracks. A former member of the Levon Helm Band, O’Brien handles keyboards throughout.

An all-original set of contemporary blues, “All I Need Is You” will put a smile on your face to open. It’s a rich shuffle that features Kennedy and Ruthie trading verses and professing their love for each other before joining forces on the reprise. Linden’s fretwork swings from the hip throughout, and Harrison’s rich voice belies his age – something that comes to the fore in “Easiest Thing to Do,” a tune with country blues appeal that delivers complains about bad knees and an inability to dance but that he can “slip and slide…the ladies know what I mean!”

The funky “Thanks for Tomorrow” shows gratitude in advance for a continued future with a gal who’s helped the singer out of a past rut before the stop-time “On Call Man” urges another lady to pick up the phone any time she needs a pickup. The cautionary “Women” follows with Caddell fingerpicking the strings as Kennedy warns men that, if your relationship is in trouble, the lady’s as good as gone as soon as she sees what she wants.

The heat’s on again for the barrelhouse rocker “Checkin’ You Out” before the flavor of the country returns for “Crazy Love,” a ballad in which Harrison can hear her heartbeat from 1,000 miles away and heaven opens each time she smiles. The pace picks up slightly and O’Brien shines on the keys for the soulful tribute to Bluff City in “Memphis Trippin’” and picks up steam for “Cranky Woman,” which sings her praises instead of delivering a complaint, before “Doomed,” a tune with cowboy appeal, “You Lost Me,” the announcement that a relationship has come to an end, and the uptempo rocker “Just Wanna Play” bring the disc to a pleasant close.

Harrison Kennedy may have snow on his roof but there’s a strong fire burning in his heart and it comes through loud and clear through his tunes. Strongly recommended for anyone with a love from traditional blues.

Black Cat Biscuit – The Way It Is 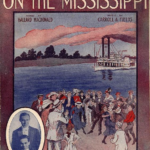