“Irreverent”, “Hilarious”, “Earworm choruses” and “Too heavy for us butty”. Just some of the terms used to describe Dropping Like Flies over the past few months. DLF were formed from the breakup of Welsh punk legends 100,000 Bodybags, during the Covid-19 lockdowns in March/April 2020. 100KBB called it a day after 29 years and founding members Simon Cullen and Craig “Brewer” Bruzas continued to write, sneaking time together illegally during lockdown in a kitchen or garage, hiding from nosey neighbours, Covid wardens and hyper alert dog walkers in order to write and rehearse a set of new original material. With bass and drums recorded on twelve new songs in November 2020, during a brief break in totalitarianism, a new guitarist was recruited with Brian Meade, an old school friend (although we aren’t sure who’s) who had never played in a band before, joining as the third member of Dropping Like Flies.

After battling Covid lockdown laws and then Covid-19 itself, it wasn’t until August/September 2021 that Dropping Like Flies were able to finally play live together with an appearance at The Landed Festival(‘s acoustic stage) and over the remainder of the year the band made up for lost time, playing at least 2 gigs every week up to the new year creating a real buzz everywhere they played. At the same time, work was completed on the album with 3 singles launched and a full LP of 12 songs mixed and ready to release, Dropping Like Flies are ready to kick on in 2022 and take on the world using a unique mixture of hard rock riffs, insightful political polemic and a warped sense of humour that

will either have you laughing out loud or running for cover while covering your Nan’s ears. 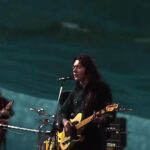