Chanting Hildegard von Bingen’s “O Frondens Virga” from the back of a quirky and dangerous* masonic den, caked allover in visionary if whimsical art, the 12 members of the mostly acapella Nightingale Ensemble, processed sonorously toward a corner stage. Our ears took us back 900 years, and we could imagine the illumination from active screens and scorelights to be votive candles of dark-clad monks, nuns prioresses and abbots of old.

The four-year old ensemble’s hour-long “contemplative, meditative, compline-style service” ‘Modern Renaissance,’ ” curated by ensemble-member Joshua Glassman, took inspiration from the culturally diverse creation stories vying for our attention on the walls and ceiling of the totally tattooed former Masonic hall in a quiet residential street in Somerville. Last night’s full house of about 150 30-somethings concentrated intently, saving its ovation for the close. 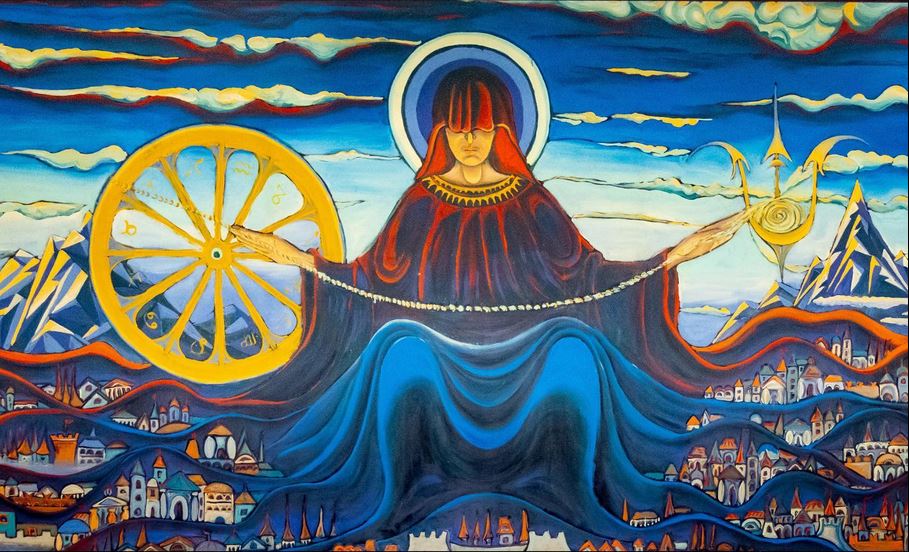 “When I saw this painting, I was struck by the ways in which each element of the painting interacted with and created each other. I loved how the cloak became rolling hills, how clouds became mountains, and the idea of sewing or textile work created this process. I was inspired by the idea of creation expressed through textile creation, and immediately thought of my friend Anthony Rodgers, who created her own clothing and design company. Her work with texture and design is incredible, especially in its focus on the celebration of queer bodies, and her artistic philosophy inspired me to write this piece in response to this painting. Creation is a loving action, and something that we do for ourselves every day in how we dress and present ourselves to the world.”

We heard the close intervals and jazzy stylistic fluidity of this creation tribute to cloth unfold through weird harmonic slices and repeating unisons—sometimes patiently, sometimes emphatically—celebrate bodies of all shapes, “tall, short, thin, wide” (but not fat). The words and import of Anthony Rogers’s text came across well in the sensitive setting.

Distant breaths resolved into humming and then all the English vowels emerged (except for the piratical aargh) at the beginning of Nicholas Ford’s “Three Breaths.” Reserved contemplative episodes and crescendoing eruptions vied for our attention in a language that incorporated slippery slides, chanted mantras, more quiet windiness, and shoutouts. We heard some words in French and Latin, but the texts did not appear on the projection screens, so we know not whereof they spoke.

Natalya Kolesnichenko’s “Svete Tichij” (1990), in setting the Evening Hymn from the Great Vespers, transported us to a sumptuous Russian Orthodox cathedral.  With smoky trappings, intense, passionate and engaged, it worked perfectly in the space…like a Russian Gabrielli.

“The Three Goddesses,” text and music by Kelvyn Koning, pranced like a Thomas Morley madrigal. A repeating male drone of “The sun, the rain, the Earth” supported some pleasant parlando setting of words about a garden. Candide came to mind.

Perhaps the grooviest work in this stoner-perfect concert, Nathan Halbur’s “Creation Myth,” was announced by bell strikes…which just kept going. Harmonized vowels ensued and then a big diminished seventh chord (I think) on “Surrender.” And did we hear some throat singing from the basses? Ayla Goktan near Haiku served the composer well:

Call me Surrender because
I am her, whose fists
were clenched so tight
that now, open, they hold
not even a poem.

John Haukoos cast his compositional Tarot cards and revealed “The Fool’s Journey.” Its quiet humming preceded Swingle Singers episodes of du, du…la, la…dum di dum, with more Morleyesque stops and starts. In this number, the projection of light cutouts directed our eyes to ceiling details and required much twisting of necks and finger pointing to find the action.

“Lux Aeterna” cast its relieving eternal cosmic light in Tomás Luis de Victoria’s renaissance setting. How perfect again to hear this in the Museum of the Modern Renaissance diadem. Aside from some queasy intonation at the beginning, the virtuosic professional choir put this across most effectively, as they managed yet another startling but effective stylistic transition.

Then at last came the tabla. We hadn’t expected that, but in keeping with eclecticism of the evening’s theme, “The Tipping Point,” brought us into the Hindustani myths of creation. “Amy Fogerson’s text (including takes the solstice as metaphor for a larger social struggle between darkness and light, exploring the return of light in yearly cycles,” according to composer Reena Esmail. “In certain sections, the singers sometimes sing in taal (p/d). They use bols (onomatopoeic syllables) from two typical Hindustani rhythmic cycles called Teentaal and Deepchandi. There are also solo parts that give a few singers a chance to try a characteristic Hindustani rendering of Raag Vibhas.”

We experienced the chanting of the mantras and rhythmic complexity of the singing as perfect counterpoint to Giri Subramaniam’s virtuosic tabla renderings. And after hearing

We were delighted to learn that

For light is life and
Light always returns

Along with Skylark, Blue Heron, and other local and migrating songbirds, Nightingale can be counted on for originality of tight thematic programming. Under conductor Ben Perry, the ensemble’s cosmically celebratory, churchy, and secular musical offering saturated its young fans with quite a straight-toned wallop. More on its season HERE.

The show’s creator Joshua Glassman gets the last word:

Nightingale is a young ensemble dedicated to performing new music and music of female and BIPOC composers. As a classically trained musician and a graduate of two traditional conservatories, I recognize the importance and beauty of the classics, but acknowledge that in order for this art form to survive, it needs to reach new audiences through adaptation. A lot of the music you heard last night was composed within the last six months, but utilizes forms and harmonies championed by some of the most prominent mid- to late-20th-century masters, while incorporating unique themes relevant to today. “The Tipping Point,” in particular, is a masterwork in the blending of Indian Classical and European traditions, showcasing yet another aspect of what the future of classical music can be.

*The Museum of the Modern Renaissance, the home of its creators, has some limitations as a performing space. Sightlines are problematic with a flat floor and no raised stage. Beyond that, the singers placed themselves in a distant corner while the audience sat facing the murals on the side wall, giving pride of place more to the art than the music. The sound, with the standing-room-only crowd shoehorned in reached us warm but dry.

I feel it my duty to report that the space does not meet code for public assembly. The second-floor auditorium had no clearly marked and accessible second means of egress. We saw no emergency lights or exit lights. The chairs were not cleated together. The aisles were insufficient. A long line waited for what appeared to be the only toilet room. Did any provision for handicapped persons exist? Legal parking was almost non-existent.

We’d like to return when the hall is in compliance.

Lee Eiseman is the publisher of the Intelligencer 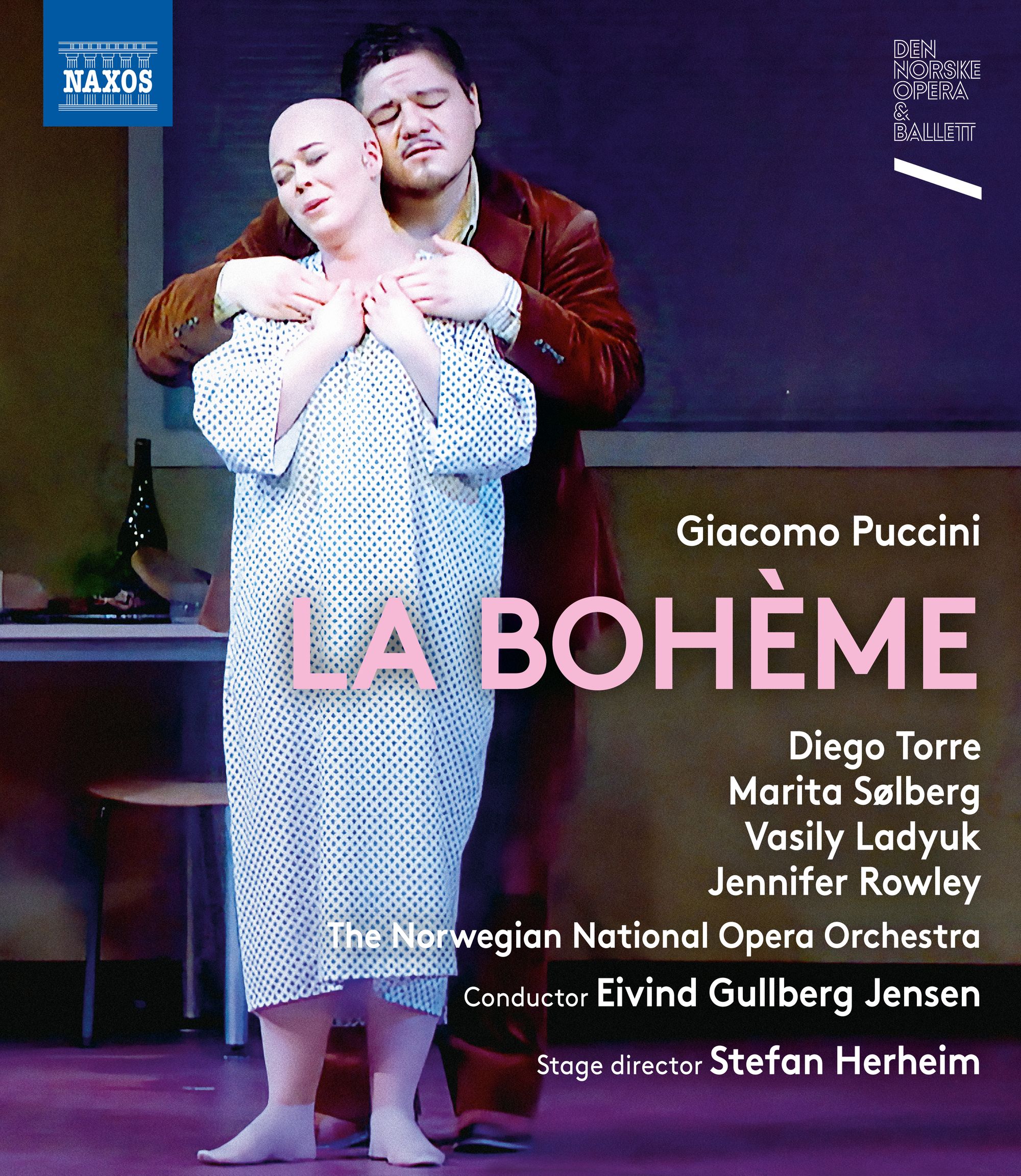