Northworks’ “Repeating Is In Everyone” is a minimal house masterpiece

Massive respect for anyone that can lead off a one-sheet for a 21st century electronic music EP with a quote from the Modernist canon, much less from Gertrude Stein. “Repeating… is in everyone. In everyone their being and their feeling and their way of realizing everything and everyone comes out of them in repeating.”

Stein may not have imagined music being created from synthesized sound and captured claps, but this line is the credo and inspiration for Repeating, and the first track “Repeat Is In Everyone” in particular.

Northworks’ EP was nestled in the middle of a pack of promos I was thinking about throwing away for lack of anything interesting. I was somewhere between tech house hell and the 9,000th ravey rip-off from the ’90s when this chill little number started to play. Immediately the atmosphere changed. The beats hit hard but muffled, a submerged heart, with short passages forming a melody like a hand that idly taps at the fingers of a broken piano. “Repeating Is In Everyone” is a minimal house masterpiece, straddling the line between music for minds and music for losing one’s.

⚪️ Disclosure Statement: This record was not submitted as a promo.

#ReDiscovery: This was originally published in 5 Mag Issue #197 featuring Billie Ray Martin, Eternal Student, Lady Blackbird and more. Support 5 Mag by becoming a member for as little as $1 per issue and get every issue in your inbox right away!

Nothing Left Behind, by Tomotsugu Nakamura 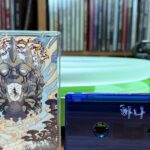