Nothing Left Behind, by Tomotsugu Nakamura

Tomotsugu Nakamura is a musician and graphic designer residing in Tokyo, Japan. His primary artistic practice is to compose music with some fragments of minimal acoustic and electronic tones and some field recordings. In Concert, he has played with various genre of musicians and his works have been released by Kaico, Audiobulb Records, and more recently by the recent label LAAPS.

’’Nothing Left Behind’’ is his second release on LAAPS after his well acclaimed album “Literature” released in July 2020. 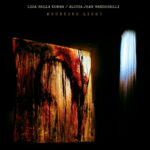