A faculty recital on steroids—with famous alums and the occasional current student collaborators all volunteering their services—that’s what New England Conservatory worthy Laurence Lesser inaugurated 38 years ago with his initial First Monday at Jordan Hall series of free concerts of great chamber music. If you want Larry to talk to you about this year’s edition rather than reading further, click HERE for his video of the October 3rd program:

FLE: It looks like a chronologically disciplined French fall series. Can you elucidate connections among the pieces other than the passing of time? They’re all inevitable French composers, but I’m sure you have something to say.

LL: The Baroque portion of the first program centers on Louis XIV, the Sun King. Marais and Couperin worked at his court along with originally Florentine Lully (more on that in the full podcast). Eventually Couperin and was the big music man in the court, and Lully was the big person before that. Marais played in the court orchestra.

One of the big things in Couperin’s life was reuniting the French and Italian schools. He wrote a piece called Apotheose de Lully to celebrate that rapprochement.  It comes in many short sections, each of which has a narration which is in French, but it’s going to be read in English by Sarah Darling. As we’re going along with the five-minute-long sections, Lully arrives. It’s kind of funny because the French Parnassus gods are not so keen on having an Italian in there. And at the end, there’s kind of a negotiation and it ends happily.

Then it occurred to me that Debussy greatly admired Couperin, thus his “harp” trio, Violin Sonata and Cello Sonata. I’m playing in the latter, and this is the first time I’m playing Jordan Hall for a while because of eye problems. I’m looking forward to returning with the Debussy Cello Sonata. I’ve played it all my life. Now I can go back and really see what this piece is about. I’m looking at the detail and hope I can still convey it.

Interestingly, the first performance of the trio was done in 1916 in Jordan Hall because of George Longy and the whole French connection with the Boston Symphony.

I don’t see any Rameau and he’s considered the father of harmony. How come he didn’t make the cut?

I certainly considered him, but I, you know, I have a limited amount of time and limited amount of space. The Couperin and Marais are being done at A 415 on period instruments and we had to set up rehearsals in Peter Sykes’s instrument collection in Cambridge in order to make it happen.

So do you guys really rehearse enough for these concerts?

Go to Hell! Enough of these enoughs! You think we don’t rehearse quite enough, and my lovely late wife Masuko thought I talked much more than enough in introducing First Monday concerts. So during the pandemic, I began to create a set of pre-concert program notes as videos. You can find them on YouTube NEC First Monday [HERE]. There’s also a wonderful concert-streaming tab on the NEC website [HERE] with a lot of great content, including First Mondays.

Looking ahead to the second concert, I’m particularly pleased to be doing Poulenc’s Babar. He was playing piano and his nieces were around him. They came over and they pulled his hands off of the piano. “That’s terrible music. We don’t want to hear that.” Since he loved these children, he would read a chapter of “Babar” (the elephant) and then improvise some music that children could love. Paula Robeson will read the narration in English. And that concert closes with Messiaen’s Quartet for the End of Time

It’s interesting to think of how Messiaen thought of free birds while imprisoned.

Click HERE for the listing of our entire season. of free concerts. 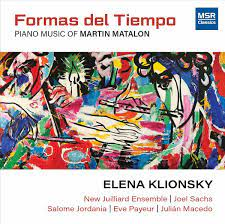