Odyssey roared back from a two-year covid-caused absence with a powerhouse concert traversal of Rachmaninoff’s total operatic oeuvre: Aleko, The Miserly Knight, and Francesca da Rimini. Odyssey’s General and Artistic Director Gil Rose had suggested that the Jordan Hall presentation of all three of these works in a single span likely constituted a North American first. Even with the 3:00 start time, the show stretched into the early evening, yet intensity never flagged.

These three works are of high interest individually and each is rarely encountered. Hearing them sequentiually allowed assessment of the early development of this composer as a prodigiously gifted colorist and dramatist, well in advance of his many later and better-known works such as his piano concerti and symphonies. Indeed, part of the fascination was hearing precursors of his later melodic shapes, instrumental colors, brilliant orchestrations and sense of dramatic arc. Isle of the Dead and Symphonic Dances — two masterworks of his later career — made themselves evident in pre-echoes.

All involved stood at the peaks of their abilities. The large orchestra, confidently led by concertmistress Heidi-Brown Hill, surpassed every challenge. All soloists soared, both as singers and as an embodiment of their characters. The chorus of 60, expertly prepared by Mariah Wilson, included several members recruited from local Ukrainian and Russian communities who contributed authentic sonorities. Thanks partly to Olga Lisovskava’s language coaching, Russian pronunciation and sound came across as correct and essential. In this exciting concert Odyssey Opera inked another big win.

Aleko, the earliest composed of the three operas (1892), is perhaps the best known, though its performances are hardly legion. In Greater Boston, Commonwealth Lyric Theater gave a presentation some 10 years ago [reviewed HERE]. Centering on a tale related in a long narrative verse by Pushkin, the libretto by Vladimir Nemirovich tells of love lost and fought for within a Roma community, where tempers flare and revenge is tasted. The 19-year-old Rachmaninoff’s remarkably precocious score earned him the Great Gold Medal from The Moscow Conservatory. The opera’s single act unfolds with unfailingly engaging music with clear hints of the greatness this composer would later achieve.

The Old Man relates how long ago he loved Mariula who ultimately left him for another man. Zemphira, their daughter, is now an adult and has a child. The two of them live with a Russian — Aleko — in the Roma encampment. But now Zemphira is bored with Aleko and loves another younger Roma man. Jealousy drives Aleko to confront the couple, and he kills them both. The troupe spares Aleko’s life but banishes him forever.

Aleko’s music pays homage to its contemporaries as it yet looks forward. Definite echoes of Borodin pervade its beginning, especially from the chorus, whose music reminded of his Polovtsian Dances. Kevin Thompson, an elegant basso, sounded compelling and believable as The Old Man. As Aleko, the love-addled protagonist, baritone Aleksey Bogdanov was ideally cast, with a gleamingly focused voice; even the very back rows of Jordan Hall benefited from his tonal splendor. The Ukrainian-born soprano Yelena Dyachek, who later would shine even more brightly in Francesca da Rimini, took the role of Zemfira. In every moment on stage, tenor Andrew Bidlack projected his character with ease and beauty of tone. All of these singers produced authentic sounding and believable characterizations throughout the afternoon.

The skillful orchestra played two colorful Roma dances early on. Oboist Jennifer Slowick, flautist Sarah Brady, and clarinetist Jan Halloran essayed elegant solos; they and their colleagues realized Rachmaninoff’s orchestrations with total engagement. The chorus, compellingly effective as narrative descriptors, vocally limned the enveloping darkness of the Roma campground lit only by the moon, and later told of the tragic outcome of jealousy and revenge, accompanied by tolling tritone death knells within the orchestra.

Rachmaninoff wrote The Miserly Knight between 1903 and 1905, a period in which the premiere of his Second Piano Concerto had catapulted him into a new level of public awareness and personal confidence. From the beginning, the Knight evinced more of the composer’s mature style than had Aleko. Restless strings reminiscent of the composer’s yet-to-be written 1908 Isle of the Dead pervaded the portentous prelude. Other moments reminded of his Symphony No. 2, (1906-7). Sumptuous tuba playing from Jobey Wilson, equally partnered by bass clarinetist Gary Gorczyca enriched the deep timbres.

The strange tale, again from Pushkin, tells of a wealthy, aged Baron who refuses to support his wastrel son, Albert. When the impoverished Albert tries to borrow funds from a local moneylender, he is rebuffed. Why not try patricide instead, suggests the Moneylender. Albert is appalled, sends The Moneylender away, and appeals to the Duke who rules the region. This all sets up the dramatic core of the opera, an extended monologue for the Baron as he revels in his riches stored in a deep cellar, and worries that if he dies, his useless son will inherit his wealth. The Duke hides Albert in an abutting chamber and attempts to convince the Baron to share his wealth. The Baron demures, and suggests that his son only wants to steal from him. Hearing this, Albert bursts in and accuses his father of lying. The Baron challenges his son to a duel, which Albert accepts. The Duke is put off enough to expel the Baron from his court. The strain of this provokes a heart attack to strike the Baron down. As he dies, he ignores his son, and calls out only for the keys to his chests of gold.

Spencer Hamlin, a ringing and dramatic tenor, took on the unsympathetic role of Albert and made us feel his pain and frustration. Tenor Yeghishe Manucharyan, a regular with Odyssey Opera over the years, made a nearly ideal appearance as the scheming moneylender, skillfully bringing a requisite vocal sleaziness to his character. Aleksey Bogdanov returned to sing the Duke with royal aplomb and zeal. And, Kevin Thompson’s rich basso informed the somewhat minor role of Ivan.

Veteran basso Mikhail Svetlov commanded the stage, utterly inhabiting his role as the miserly Baron, whose only love in life is the gold amassed in the chests which fill his deep cellar. It mattered not that no stage set or props backed him up. He created all of the atmosphere needed by dint of his sheer vocal and dramatic presence. For 22 minutes the audience sat transfixed by his singing and acting through his monologue as his character worshipped his golden horde, lighting candles around the chests filled with glinting gold with greedy delight, and fear, too, that he might die and have his wealth go to his son. Rare is the singer who can hold an audience in the rapt manner Svetlov achieved, and at the end of his monologue, the audience burst out with cheers and applause, unable to hold back.

I was struck by several orchestra effects in this music as well, hearing what I thought were several Wagnerisms, in particular, references to Das Rheingold, where the Nibelungen also jealously guard an underground horde of gold. I was pleased to later read in a BMInt interview [HERE] with Gil Rose that Rachmaninoff had visited Bayreuth just before writing this opera. Q.E.D!

The afternoon wended its way into evening with Francesca da Rimini, in several ways the most revelatory work of the event for what its sound and structure bring. Some critics disparage that structure as ungainly. It begins with a long prologue, which is followed by two short scenes and an epilogue. Yet the overall arc felt concise and compelling, resulting in a musical drama that rose to a powerful and moving force by its end.

Modest Tchaikovsky, brother of Pyotr Ilyich penned the fascinating libretto. Modest had suggested to his brother that this sad tale would be worthy of a composition, and Pyotr’s brilliant symphonic poem Francesca da Rimini (1876) resulted. But the setting of the tale as an opera had to wait for 1900 when, with Modest’s libretto, Rachmaninoff began to write his new opera’s love duet.

The action begins with a long prelude in which the chorus sings a mournful wordless dirge as Dante and the Ghost of Virgil descend through the Circles of Hell to a place of constant whirlwinds, where the spirits of those damned by lust are forever detained. There they meet Francesca and her lover Paolo, and their earthly story is recounted. Francesca was tricked into marrying the deformed Lanceotto Malatesta, a great warrior, who became consumed with jealousy over his suspicions that Francesca might be in love with his younger brother Paolo, whom Malatesta had asked to woo Francesca on his behalf. It’s even more complicated. Not realizing that Paolo was representing the older man, Francesca falls for Paolo as he reads to her the tale of Lancelot and Guinevere. Lanceotto finds them kissing, and stabs them both to death.

As improbable as this plot may seem, it inspired Rachmaninoff the most among his three operas. During the moving wordless lamentoso chorus I wondered if Ravel might have heard this opera, as he employs a wordless chorus to great effect in his 1912 Daphnis et Chloé. A gorgeous love duet then begins as Paolo reads the story to Francesca. This is clearly a major operatic love duet, yet it is hardly ever heard.

As Francesca, soprano Yelena Dyachek soared to wonderful heights and revealed a gleamingly beautiful top. As Paolo, Andrew Bidlack wooed her brilliantly, yet again bringing his powerful yet lyric tenor to his character. Aleksey Bogdanov sang Lanceotto with deadly earnestness in his extended and dramatic monologue, again totally believable as the jealous older brother driven to murder. In the smaller roles, the ever-reliable Yeghishe Manucharyan and Kevin Thompson tellingly portrayed Dante and the Shadow of Virgil.

In a masterstroke of drama near the opera’s end, the chorus finally sings actual words, words that Francesca told to Virgil and Dante at the opera’s very beginning, made even more moving and powerful here in the opera’s final measures: “There is no greater sorrow than to recall happiness in times of misery.” As those heartbreaking words are vehemently driven home by the chorus, the music, swirling violently as it again depicts the wailing whirlwinds forever entrapping the suffering souls of those overcome with earthly lust, the opera spins to its tragic end.

There can be no praise high enough for what Gil Rose and his inspired forces attained in this remarkable realization of extraordinary music by a true master virtually unknown for opera.

Bravi to all. I felt privileged to be there.

John W. Ehrlich is music director of Spectrum Singers, which he founded 40 years ago. He has been a singer and conductor in the Boston area for more than 47 years. 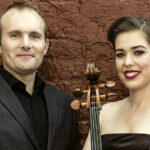