Rediscover Raff for his 200th Birthday

Well, here’s your answer. Joachim Raff (pronounced /rof/ rhyming with “cough”). Born in Lachen, Switzerland 200 years ago (1822), Raff was prolific and well-known in his time with numerous famous names in his circle of friends, students, and colleagues. However, despite all of this, his works are relatively unknown and not often performed today.

His prolific career is somewhat surprising given his musical background. Unlike some composers who are groomed at a young age with serious musical instruction, Raff was largely self-taught while working as a schoolmaster. He sent some piano compositions to Felix Mendelssohn who recommended them for publication. After these compositions were published in 1844 and receiving good reviews from Robert Schumann’s journal, he went to Zurich to take up composition full-time.

In 1845 after hearing Liszt play the piano, Raff became Liszt’s assistant, helping with orchestration of several works. During this period, Raff wrote an opera, König Alfred, however most of his works were written later in the 1860’s and 1870’s.

Aside from opera, Raff wrote numerous suites, lieder, works for small ensembles like quartets, overtures, concertos, and a series of orchestral preludes to Shakespearean plays. He also wrote 11 symphonies, but the 11th remained unfinished at his death. His 7th symphony is often considered a more toned-down version of Richard Strauss’ An Alpine Symphony and it may have served as Strauss’ inspiration (the two were friends). His 5th symphony (Lenore) is considered by many to be his best.

In 1878, Raff became the first director of and a teacher at the Hoch Conservatory in Frankfurt where he most notably established a class specifically for female composers. Women composers at the time were still not taken very seriously. He employed Clara Schumann as a teacher at the conservatory.

Raff may never be a famous name in classical music, but his works are solid examples of Romantic period music and are worth rediscovering – especially with this year being his 200th birthday. Listen to some of his works below: 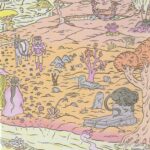