John Wilson and his Sinfonia of London have seen a productive past couple of years with several releases focusing mainly on French and Italian works. But one album (which I reviewed back in 2021) set its sights on the works of Erich Korngold. I remarked upon the cinematic nature of the works, which bears particular relevance to this new effort: Hollywood Soundstage features Korngold again, along with some of the memorable film music of the 1940s through the 1960s.

It is Korngold’s Overture from “The Private Lives of Elizabeth and Essex” that opens the album. The top-notch effort from a strong brass section is what truly drives the performance throughout: the tone is unapologetically bright and invigorating, the dotted rhythms very crisp – but the blending between different instruments is done just right, so the timbres don’t wind up too hard on the ears. The rest of the ensemble doesn’t fail in the energy department, either. The march that begins at 0’50” is filled with pomp and circumstance fit for a queen. What I liked here was also the intelligently calibrated balance of characters: the lower strings have an almost gruff quality in their bowing but the horns counterbalance that with infectious jubilation.

Any enthusiast of Hollywood’s Golden Age films will be delighted to see Harold Arlen’s Suite from the Wizard of Oz (track 3). The music alone makes for a fun listen but Wilson and ensemble do their due part to really get us involved. We’re welcomed right away with the “Somewhere Over the Rainbow” theme, complete with sweeping strings and, once again, resplendent brass. What follows is the adventure with moments like 1’52” onwards: the now suspenseful strings are interrupted by much sharper-toned brass that pulls us into a high energy, helter-skelter section. For all the cinematic freneticism, though, the instrumentalists always hold onto their clarity, heard in moments like 2’17”. Of course, the best part is the recurrence of the “Rainbow” theme at the end, which we’ve all been waiting for. The violins have a fuzziness reminiscent of a 1940s film recording while the appearance of the solo violin is sensitive but not too saccharine.

If you’ve seen My Fair Lady, you will remember Audrey Hepburn’s coy but nonetheless stunning entrance in the iconic ballroom scene with the Embassy Waltz (track 4) playing in the background. A comparison between the original soundtrack and Wilson’s recording reveals some small but illuminating differences: where the original is just a hair faster and perhaps has more of an energetic edge to encourage the guests to dance, Wilson plays very much to the elegance we see in Hepburn’s transformed heroine. I enjoyed discovering the layers of textures and sounds that I had not realized were there before–the wafting bass downbeats, the small flute filigrees, and lyricism of the violins. The percussion (cymbals and triangle) show mindful control and nuance, adding just the right bit of added texture without robbing the interpretation of its refined glamor.

The final track, the Street Scene from “How to Marry a Millionaire” has a slouchy, cool jazz vibe courtesy of the trumpet solo at 0’38”. One will notice how the strings in the following section cleverly bridge the next section: they adapt the same sort of stylistic slides we heard in the solo but deliver an altogether new personality, vibrant and almost earnestly dreamy.

The sound engineering is quite good, giving us plenty of clarity in terms of orchestral timbres. It also balances the different sections of the ensemble well and allows each to shine in its due moments. Though Golden Age movie buffs may be familiar with the fare, the liner notes offer commentary for each work: I did find that the descriptions come off as a bit generic on the whole, but what is nice is the inclusion of some interesting, lesser-known facts.

The recognizable yet well-curated repertoire, along with the instrumentalists’ enthusiastic performances will certainly elicit a sense of nostalgia—and maybe a desire to rewatch—the films themselves. A refreshing album that makes for a delightful listen. 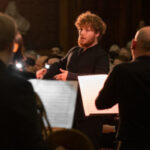