I love it when an opera company announces Albert
Herring. It’s an affectionate send-up of the hypocrisies and absurdities of
rural British life, almost like The Archers set to music.

Not precisely the same, of course, but you
have the figures of the vicar, the police superintendent, the headmistress of
the village school, the mayor, the titled lady who lives in the big house and
her housekeeper – and the younger generation: lovebirds Sid and Nancy, and a
few schoolchildren.

Then there’s Albert. He’s the son of the
greengrocer’s shop owner, Mrs Herring, and a young man very much under his
mother’s thumb. The story begins when the worthies are seeking a girl of pure
and impeccable character to be their Queen of the May … but none of the
candidates actually qualifies, on moral grounds. Only shy Albert seems to be an
innocent – so they make him King of the May.

Sid and Nancy spike his lemonade with rum
at the village fete to celebrate his coronation (what better piece could have
been chosen in this year of jubilee fetes left, right and centre?), and with
his prize money in his pocket, all unknown to everyone and particularly his
mum, Albert goes out on the razzle that night.

What happens next you need to see the opera
to enjoy best, so I won’t spoil it, but this is operatic comedy, one of the
best ever written. It’s a demanding piece, too, but Clonter Opera, the
finishing school based on a Cheshire farm near Jodrell Bank, helping young
singers find a bridge between conservatoire training and the professional
world, has put all its resources into this production and come up with
something rather special.

It’s one of the few mainstream operas that
a small-scale but well-equipped theatre such as Clonter’s can put on with the
orchestral score exactly as written, as Britten wrote it for just 13 players,
and the professional Clonter Sinfonia do sterling duty in the pit, under the acute
and supportive baton of music director Philip Sunderland.

The production by Michael McCaffery, sets
the story in 1947 – that was the year of the first performance, just 75 years
ago – rather than 1910, and the set and costume design by Bettina John quietly
underscore an important aspect of the score: the post-war sense of rejuvenation
that was sweeping through Britain at the time. This is an opera that tells us,
without ever stating it out loud, that the older generation, with their
prejudices and stuffiness, are on the way out, and the future belongs to the
young; and John’s design has detailed and authentic-looking sets of dull and
faded interiors, contrasting with brightly coloured (and sometimes near-surreal)
costumes for the characters who parade through them. The Clonter stage revolve
is skilfully used to produce successive backdrops, as in the original scenario,
and we hear the full musical entr’actes that cover the scene changes (one
reason why the full running time is quite long).

As a vehicle for young voices to show their
potential and young performers their abilities, Albert Herring could
hardly be bettered. The character studies of  Erin Rossington (Lady Billows), Flora Birtbeck
(Florence Pike), Jordan Harding (Mr Gedge), Jack Roberts (Mr Upfold) and Thomas
Stevenson (Supintendent Budd) were all engagingly realized and strongly sung,
and I think that Rosalind Dobson (Miss Wordsworth) has a particular gift for
comedy, with just the right touch of exaggeration and an ability to keep
reacting in character.

The three children were each played by
first-year students of the Royal Northern College of Music – Eirwen Roberts,
Myome Mortimer-Davies and Samuel Horton – who enjoyed their opportunities for
fun and games; and Lydia Shariff, as Mrs Herring, was able to convince us (more
than most) that she was a generation older than her real age.

But the stand-out performances in a gifted
ensemble were from Daniel Kringer, as Albert, Thomas Chenhall, as Sid, and Frances
Gregory, as Nancy. Albert is a difficult role to play: he’s not a village
idiot, rather a young man who’s never had a chance to spread his wings until
the incidents the opera portrays, and he shames his elders in the end. Daniel
Kringer’s voice quality was very durable and his diction excellent, and his
acting showed Albert learning from his experiences, right through to the
fascinating line, “I didn’t lay it on too thick, did I?” (which leaves us wondering
whether he’s smart enough to have been kidding the lot of them with his lurid account
of a night on the tiles).

And in this he’s in cahoots with Nancy and
Sid, the young couple who are well aware of the ways of the world, and the
flesh. Thomas Chenhall and Frances Gregory showed themselves to be mature
voices and accomplished actors, well equal to the world of the professional
stage – in which they’re each already busily engaged. 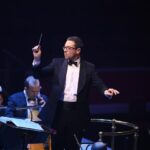 Authentic Korngold to raise the Proms roof
Share
Previous JAM 66 Radio: LIAMKINS
Next The Newspapers – Things You Need To Know This Wednesday