The Last Rodeo is a triumphant return to the recording studio for Boston-based Rosedale Junction following the success of their 2021 debut album, Stompin’ On The Front Porch. All of the songs are written by the band’s founder, lyricist and multi-instrumentalist, Toby Soriero, except “Loan Me A Dime,” credited to Fenton Robinson.

The blockbusting “Dancing Devils” is high on musical and literary creativity if rather low on domestic bliss as grandma sets fire to demons and watches them boil in the oven. With angels asleep upstairs, praying preachers on the porch and the choir singing through the night, at least some normality is restored! To a backdrop chorus of “Burn’em up, burn’em up” Toby’s scorching guitar riffs, Jim Riley’s explosive drumming, and Dgiovahni Denize’s haunting vocals make this a fire-cracker of an opening song.

Denize continues his powerful vocal performance on “The Legend of Dog Cat Elliott,” this time as a consummate storyteller. This tale about a drunken old man who kept a still in the woods was never going to have a happy ending: “Drinkin’ poisoned whisky is a big fat no / It’ll eat up your innards and go straight to your head.” Roger Smith’s intricate, fluent organ keys and Toby’s equally deft guitar strings and vibraslap percussion interpolations create the perfect blues vibe for an ominous conclusion.

The only cover is the blues standard “Loan Me A Dime,” made famous in 1969 by Boz Scaggs, and so iconic that it would seem impossible to do the song justice. How wrong can a reviewer be? It is a masterstroke by Soriero to entrust a blues classic to the classical singer Kristin Lawler, a mezzo-soprano, voice instructor, and choral director. She adds sufficient grit, edge, and emotion to her impeccable tone – her timbre and phrasing ensuring that the listener is transported back to the bygone days of phone booths and the desperation of needing a coin to contact a loved one. The gentle weeping of the keys, the arpeggio guitar sequences, and Mark Morgan’s sumptuous horn arrangement enhance the atmosphere.

“Hard Road Blues” is a jaunty cruise along the highway, Sam Tuten now taking over the vocals and traveling along with, “No regrets, no second thoughts / Lovers love and sinners sin.” A country feel is achieved courtesy of Andy Ellison’s superb pedal steel guitar work. The musicians in this band are such a tightly knit unit you couldn’t squeeze a chocolate wafer thin cookie between them. When a relationship ends, as in “Little Long Haired Angel”, the angst is unbearable. The latter is conveyed by the empathetic violin of Vito Gutilla complemented by the mournful, mesmeric groove of Steve Stizzo’s accordion. “I can’t let you see me, it’s too much to bear/You’re the only girl ever, that ever did care.”

The folksy ballad “Rhythm in the Sky” is underpinned by the sadness of an unexpected loss of a bright young talent, a friend and loved one. The musical arrangement reflects both the personal grief and also the nostalgia of life in the 1980s. The backing singer, Tyra Juliet, alongside Kristin, provide a rich texture to the composition. “No one had the sound, the look, the who, what, when and why. When I look up I know you’re there, the rhythm in the sky.”

The dark, slow-burning “Goin’ Down to Walpole” with its spectacular violin introduction is a convict’s plea for redemption. The Wurlitzer electric piano conveys gravitas as the pace quickens and the song reaches its climax:

To have and to hold

I’m on my knees hear me shout

Gonna pray to god they let me out.

Befitting the title track, “The Last Rodeo” is another vocal tour de force, this time from Rachel Gavaletz – her awesome, jazz-infused voice complemented by Toby’s staccato guitar interludes and Matt Soriero’s tasteful alto sax. The sheer beauty of “Rhythm in the Sky” justifies its repeat as a finale. This slower, acoustic version differs from the first with the violin featuring even more prominently and Toby’s mandolin and cajon adding a further dimension.

ABS readers who are impressed by the eclecticism of Rosedale Junction and Toby Soriero’s ability to push the blues boundaries to the extremes will want to listen to the band’s earlier single release, “Autumn Winds.”

The single is an English language arrangement of an Italian pop ballad written by Toby’s cousin, Luca Tartaglia. The pedal steel gives the song a country/Americana feel and the violin strings soar in the background. But above all, Kristin Lawler gives a truly stunning and inspirational vocal rendition of operatic proportions. Who said that the blues and opera would be incompatible when they both share such depth of feeling? The lyrics are delivered exquisitely with emotion and integrity:

I want to breathe the air

Even if I don’t find it easy

I will share the feelings with you in my heart

Staying miles away from you

From the distance that I put between us.

The Last Rodeo via Center Block Records, is available now, on all major on-line music platforms. 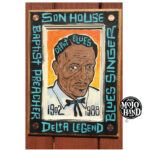