It started out as an innocent co-writing session between the two musicians. They envisioned a sound that married the explosive blues with alt-rock. On the last day in their New Orleans studio, they jammed on some songs that embodied this musical aesthetic and were eager to hear how their voices and guitars meshed. So they let tape roll, and the unexpected result was ‘The Stardust Sessions’. The pair recorded “Brand New Cadillac,” made famous by The Clash but originally written in the late 1950s by Vince Taylor, “I’ll Be Here in The Morning” by Townes Van Zandt, and “Feelin’ Good” by Magic Sam. Joining them in the studio were bassist Austin Clements (Omari Neville), and drummer Mike Dillon (Rickie Lee Jones, Les Claypool Garage Jazz Band), with Rueben Williams wearing the producer’s hat.

‘The Stardust Sessions’ precedes a full-length album containing 10 new original songs written by the pair and produced by the legendary Jon Spencer. The album, ‘Death Wish Blues’, will be released in late Spring via Rounder Records.

Jesse Dayton has been bringing his unique mashup of East Texas/Louisiana Blues, old-school country, and punk rock to the world since he released his debut album in 1995. Thirteen records later, he remains a staple on SiriusXM’s Outlaw Country and the Americana Radio charts, where his debut LP ‘Raising Cain’ reached Number 1. Jesse’s career reads like a veritable “who’s who” of American music. He’s toured with Social Distortion, Supersuckers, George Strait, Ryan Bingham, and L.A. punk pioneers X and has recorded with legends such as Waylon Jennings, Johnny Cash, Glen Campbell, and Willie Nelson. He has also recorded three soundtracks for filmmaker Rob Zombie. One can read about Dayton’s storied past in his 2022 memoir, ‘Beaumonster’. 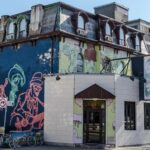