Recorded live ten years ago, Summer Dresses sending hauntingly disordered rhythms from the past. But “In Bed Early” is not an old release… brand new in June of 2022, brought forth by Already Dead Tapes and Records. Guitar, bass and drums circling in a slow melodic cadence. A maelstrom of sound on it’s own with the addition of perilous spinning eddies of electric sinew. Three selection bound together in one event. Aural raw truths from New Brunswick, New Jersey. A show filled with the heaviest beats and rhythms, standing against time and preference as intense sonic pathways of the most beautiful accord.

As mentioned, released by Already Dead Tapes and Records in an edition of one hundred. This is part of the June 2022 Cassette Release Bundle. The companion release is by Coach Campa Trio, titled “Aggressively Unfriendly”. In the quickest blink, there are only two bundles remaining for June and only four “In Bed Early” tapes left. 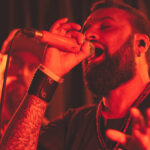 Get The Perfect Mental Surface, by Jacek Doroszenk