The Future is Female piano project

Sarah Cahill, pianist, has just released a new album called, The Future is Female, Vol. 1, In Nature.  The album debuted on March 4, 2022. This album will be the first of a 3 album series featuring 30 solo piano works all composed by women around the world.
​
The album is being recorded by First Hand Records. The album series will celebrate women composers from the 17th century through present day.

Cahill started this project back in 2018 and said, “Like most pianists, I grew up with the classical canon, which always excluded women composers as well as composers of color… The Future is Female, then, aims to rebalance the repertoire. It does not attempt to be exhaustive, in any way, and the three albums in this series represent only a small fraction of the music by women which is waiting to be performed and heard.”

Cahill has previously performed The Future is Female as a flexible concert program since the inception of the project. It has been done as evening length recital performances and marathon performances in concert halls, museums and gallery spaces. Recent performances have ran between 4 to 7 hours and the audience has been welcome to come and go as they please.

You can learn more about Sarah and the project here. 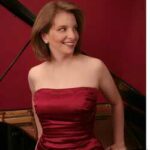