A sepia-tinged pre-war blues stomp that sees Risager yearn,”Truckloads of darkness here, and my matches are soaking wet…will this black night ever end,” the song spins an ominous tale of being lost in an abyss, with no direction home. “Sometimes your GPS is just not working and your maps are torn apart and you don’t know what to do or where to go,” Thorbjørn reflects.

And what a blues tune it is. “Navigation Blues” a slice of roots magic with soulful groove. Thorbjørn Risager’s vocals are full of character, a genuine storyteller, his playing on resonator guitar lives and breathes the blues. Joachim Svensmark’s stellar guitar work hints of Freddie King with his own modern spin. The band itself is so in sync, super-tight, with horns and strings on this moody gem. With such top tier musicianship and a rockstar like Risager, they bring this song home like no other.

The video’s cinematic themes add to the moodiness of the track, beautiful shot by Christoffer Askman. Get ready to be wowed. Watch below.

Over the past twenty years, Thorbjørn Risager & The Black Tornado has blazed a trail across Scandinavia, Europe, Canada, the US and Asia. They’ve been captivating crowds with their dynamic stage presence and a sound that fuses soul, Chicago blues, boogie and rock ‘n’ roll with a voice where Ray Charles, Van Morrison and Billy Gibbons meet in the middle. They’ve brought dancing shoes to Europe’s largest festival stages and low-light noir-ish blues to Jazz clubs around the globe.

About to release their eighth studio album, the multi-award-winning band has opened for Bonnie Raitt and the Tedeschi Trucks Band, as well as Risager himself, sharing the stage with legends such as Buddy Guy, Doyle Bramhall II and Robben Ford.

Growing up in the small town of Jyllinge, about 30km from Denmark’s capital city, Copenhagen. Risager would sit in the fishing village’s harbour, looking out where the sunset met the distant hamlet horizon. Staring out into the expanse of clouds and the undisturbed landscape opposite as the breeze ambles past, blowing on the fjord, which hides Viking stories of times past, watching the sun go down – he would think, reflect and wonder about the world beyond.

Having formed in Copenhagen, they are real road warriors, spending 9-10 months a year touring, but it’s something that they’ve never taken for granted. “Every concert is a unique experience. You just look at the audience’s smiles and reactions, and you know that what you’re doing makes sense.”

Their prolific travels around the globe have swept-up fans across every corner, including non-other than Elwood Blues himself, Dan Aykroyd! Who hailed their “Hot rhythm and blues”, saying Risager has “got a great voice, great delivery and feels the blues. The songs are original, but sound like they come from a Stax recording session circa 1965.”

Two decades on the road have given the band an incredible ability to know what makes people move – in both feet and heart. On Navigation Blues, they use this skill with complete precision, whether it be the front-porch blues of “The Way You Make Me Feel” to roof-raising rockers such as “Fire Inside” or “Headed for the Stars” to the gentle ache of “Blue Lullaby” and “Heart Crash.” But their showmanistic sense of adventure is never far away, which can be seen on the rock ‘n’ roller “Hoodoo Lover” or the boogie of “Taking the Good With the Bad.”

From the humble beginnings staring out from that harbour in Jyllinge to the bars of Copenhagen and now, regularly selling out 1000 capacity venues in their native Denmark, Sweden, Germany and beyond. International awards, National TV performances and praise lavished on them from a Hollywood legend – Thorbjørn Risager & The Black Tornado feel like they are only just getting started.

“We built it up from the ground the old-fashioned way,” he reflects. “If you wanna make a living out of playing the blues, it’s not enough to play only in one country, so we’re thrilled to be able to play all over.”

At twenty years in, the band are in white-hot form and will be showcasing their new material across Europe for the rest of 2022. “Playing live in front of an audience makes you feel alive. That’s the best way to describe it, I think. It’s good to feel alive,” he smiles. 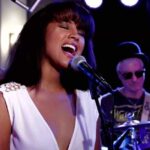 Blues Overtook Me · Charlie Musselwhite
Share
Previous Sounds Interesting. You ditty rats! – The Naxos Blog
Next Music, from Richmond County to the World. An exclusive interview with Maestro Alan Aurelia