Victorian Opera has made the musical education of young people a priority in terms of both performers and audiences. This year alone has seen a reprise of the hugely successful The Selfish Giant and on Saturday night we had children flocking to see the Pierangelo Valtinoni’s Il Mago di Oz. Composed in 2016, it is one of his series of fantasy operas based on works for children.

Unlike most VO productions predominantly aimed at children, the cavernous splendour of St Kilda’s Palais Theatre was the chosen venue rather than the relative intimacy of the Arts Centre Playhouse. Without the use of body mics, audibility proved to be problematic at times, especially when soloists were placed upstage. Thanks to surtitles, however, Paolo Madron’s Italian libretto was never completely lost and even the less fluent readers of the translation would have been able to follow the famous story line because of their familiarity with Lyman Frank Baum’s Wizard of Oz and/or its Hollywood rendering.

The ample size of the of the Palais Theatre stage had the advantage of enabling the orchestral ensemble, soloists and a huge cast featuring Victorian Opera’s Emerging Artists and Children’s Chorus. Staging Director Constantine Costi used these forces effectively with singers swaying as part of the tornado movement or as poppies in the field. While the young children made suitably cute munchkins and mice and sang with disciplined clarity, the older members of the chorus were more often arranged around the edges of the stage, where they sang gloriously. Generous tone shone in beautifully blended harmony – a huge credit to those who trained them. It was clear that Melbourne has an outstanding group of soprano voices emerging.

Chad Kelly’s conducting was also a great asset in providing the support needed, giving clear direction to the singers and the combined Victorian Opera Youth and Chamber Orchestras. Although the orchestral ensemble included a number of players from the Victorian College of the Arts Secondary School, it acted as a tight unit, giving an assured account of unfamiliar – if comfortably melodious – music.

Most of the action took place in front of the raised orchestra, a scrim curtain initially acting as a screen for old-fashioned titles and footage of what looked like the first film of Baum’s iconic story as the Overture was played. Later, Daniel Gosling’s selection of further relevant video footage was projected onto the screen at the back of the stage, complementing his atmospheric lighting design. Apart from costumes for the soloists being impressively detailed, there was minimal use of costumes and props. The chorus was dressed in white, only donning sweet mouse-ear caps for the scene where Dorothy meets the Queen of the Field Mice.

Some members of the audience might have been disappointed at the lack of ruby slippers (as depicted on the program cover and the main publicity image) but this silver shoe version is truer to the original story. Toto also appears as the original black dog, almost hidden in Dorothy’s basket – not easy to spot, but there.

Georgia Wilkinson was perfectly suited to the central role of Dorothy. Her warm resonant voice was well projected, even in the passages of dialogue, where she made effective use of vocal core. She has proved herself to be an expressive actress with a tremendously engaging personality, in addition to being physically attractive and nimble on her feet – in effect, the “Complete Package”. Her aria at the beginning of Act 2, when Dorothy laments her life as a slave to the Wicked Witch of the West, was poignant and beautifully sung.

Her three companions on the yellow brick road made a lively trio. As the supposedly brainless Scarecrow, Michael Dimovski employed his pleasing tenor voice to good effect, and Stephen Marsh was a convincing Tin Man in search of a heart, his strong, rich baritone voice clearly audible at all times. James Emerson was quite endearing as the Cowardly Lion, but sometimes lacked vocal power, particularly on the lower notes and when he wasn’t standing at the front of the stage.

As the Good Witches, Amelia Warwzon (North) and Kate Amos (South) made a charming pair, with Warwzon in particular singing with considerable beauty of tone. Always a convincing actress, Shakira Dugan made a suitably malevolent Wicked Witch of the West. Teresa Ingrilli was a spirited Queen of the Field Mice, her soprano clear and nicely rounded. Tiernan Maclaren conveyed the humour in both largely speaking roles of the duplicitous, prevaricating Wizard of Oz and the Guardian of the Gates. Whether denying entrance to see the Wizard in stentorian tones from one of the theatre boxes or rushing about the stage collecting balloons for his getaway, Maclaren was a confident, energetic performer.

Perhaps an evening performance of an opera sung in Italian with a substantial amount of dialogue in Italian is a less than ideal way of attracting the youngest potential opera lovers, but there was no doubt that the very large audience went away excited by what they had seen. The junior members of my family gave it an unequivocal stamp of approval – just the kind of recommendation that counts. So do your family a favour and take them along to see the Wizard in this entertaining, polished production. 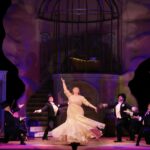